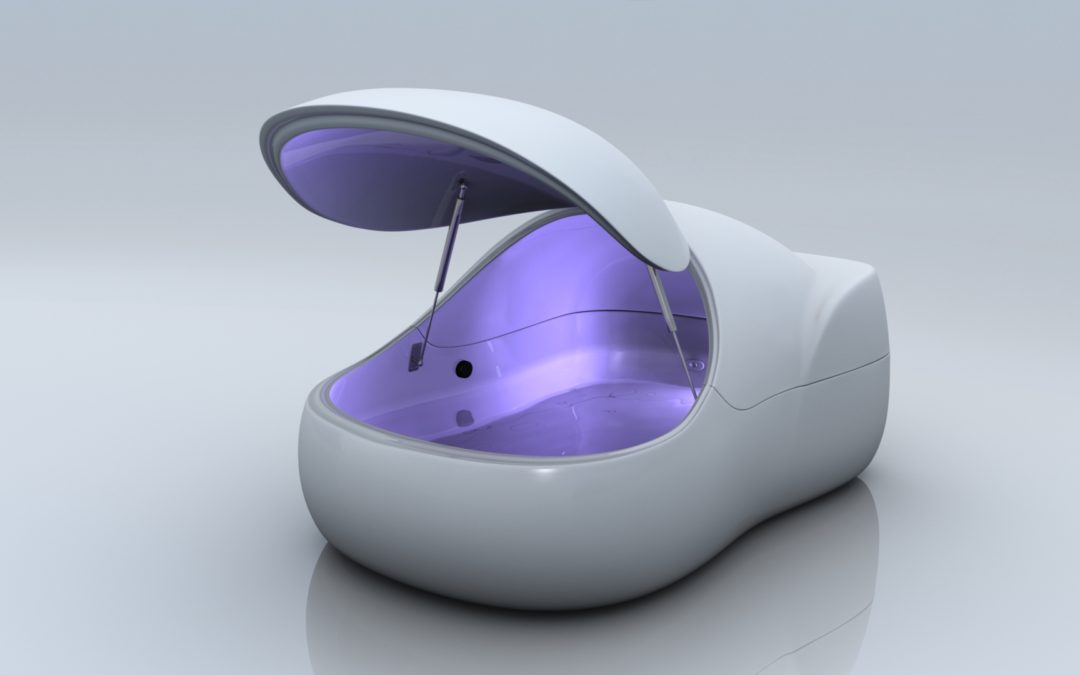 The floatation tank was invented by Dr. John Lilly in 1954. Dr. Lilly was a neuroscientist, physician, psychoanalyst, writer, inventor and philosopher.

At the time of inventing the floatation tank, Dr. Lilly was doing research on altered states of consciousness and brainwaves.

Lilly was known for participating in science experiments which involved his own body, and pushed himself to the limits of his physical and mental health.

He did varied research on the mind and body. One of his inventions was a device for measuring blood pressure, which he created while studying medical research at the University of Pennsylvania.

Some of his work was controversial and included exploring the mind with the use of psychedelic drugs. He also did much work with dolphin communication. He published 19 books which included books on these two topics.

The isolation tank was invented by Lilly to isolate the brain from external stimulation. It was originally used by Dr. Lilly to test the effects of sensory deprivation. The process became known as Restricted Environmental Stimulation Technique (R.E.S.T.)

The first tank was a simple 2.5 meter tank which was filled with ocean water. People would be completely submerged in the tank and wear a mask and oxygen. In the experimental stages subjects were upright. Despite the uncomfortable position of these early float tanks, the result was one of extreme relaxation and rest. In the late 1960’s Dr. Lilly modified the flotation tank to use an Epsom salt formula. The buoyancy effect of the high quantity of salt eliminated the need for an oxygen mask, and made the experience much more comfortable!

The magnesium in Espsom salts has a natural healing effect on the body, alleviating sports injuries, assisting with muscle aches and spasms, soothing nerves, assisting digestion and preventing migraines. Other benefits include improved heart health, increase in energy and regulation of calcium, sodium and potassium levels.

As part of the modification to this later flotation tank, a top was added to the tank to enclose the water. Water was heated to body temperature and an air pump and filtration system added.

By the 1970’s people that had been involved in Lilly’s experiments began to install the tanks in their homes, and demand grew to include friends, and acquaintances of Dr. Lilly. Celebrities such as Yoko Ono, Robin Williams and many sporting personalities took to floating.

Computer engineer Glenn Perry was impressed with float tanks and designed an inexpensive, easy way to build and maintain them.

Perry’s wife Lee Leibner had studied floatation for several years to help children with learning disabilities and hyper-activity. The couple joined forces to build floating tanks to use in the home.

Demand for flotation tanks began to grow as word spread.

Gary Higgins started the company “Float to Relax Inc” in the late 1970’s and developed a reasonably priced flotation tank for the home. FTR opened centers throughout the United States.

The 1980 film “Altered States” provoked a lot of interest in this industry. William Hurt’s character in this film experimented with floatation tanks.

In 1981, the industry produced approximately $4 million in sales and rentals. By 2013 flotation had become more popular in Europe and was gaining popularity in some areas of the USA and other Western countries. Soon after the tanks were being used in Health Spas.

Modern Day Use of Floatation Tanks

Visualization processes within a flotation tank were done by Carl Lewis prior to him winning a gold medal for long jump in the 1988 Olympic Games. NBA player Stephen Curry is reported to use a float tank once each fortnight.

In 2005, a US journalist was determined to undermine floating and upon research wrote a book praising its benefits entitled “The Book for Floating – Exploring the Private Sea”!

Research has found that the tanks are wonderful for treating insomnia and for total and deep relaxation. Floaters find that they sleep better, have relief from minor to chronic pain, and are calmer and more mindful.

The tanks have been known to treat stress, anxiety and PTSD. Other benefits include improved mood, reduced inflammation, better problem solving abilities and creativity.

Float tanks are now extremely popular in alternative medicine for relaxation and meditation. There are new float centers emerging every week in suburbs and cities.

In 2015, a laboratory for the study of flotation tanks was created at the Laureate Institute for Brain Research in Tulsa, Oklahoma.

There is now a worldwide float conference! On August 12-13 2017 the sixth Worldwide Float Conference will be held in Portland, Oregon. Events include “How to Start a Float Center Workshop” various workshops, the main conference, certified pool and spa operator training and huge social events and parties!

Lights and music can be turned on at the push of a button in many of the devices.

The growth in the use of flotation devices has been extremely rapid. Like yoga it has become popular again! It has become trendy. People are talking about it, and getting benefits from it both physically and emotionally.

There are some people who are sceptics, as in every industry. The main concerns seem to be about the smell and the cleanliness of the water. The Float Tank Association has created strict rulings regarding sanitation, cleaning and maintenance. Also, Epsom salts are a natural cleansing agent and as such eliminate germs and other nasties.

The sceptics do seem to be in the minority – most people that have tried floating cannot wait until their next session! It becomes a type of healthy addiction.

Even though skeptical, many people are trying it as they want to know what all the fuss is about! It is interesting and it seems to be here to stay!