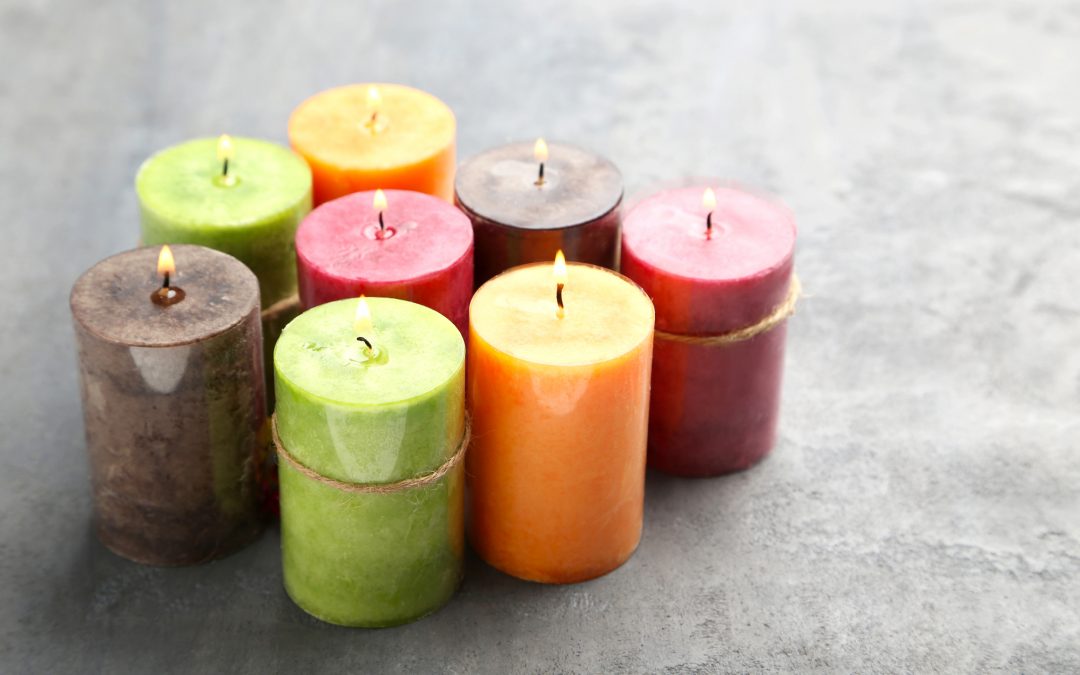 Store-bought candles can’t replace that feeling of lighting a candle that you’ve made, colored and scented yourself. You have, however, probably wondered how you can make your candles more eco-friendly by using natural ingredients. One of the easiest types of natural ingredients, that you can add to your candles, is natural dyes.

What are natural dyes?

The natural dyes that we’ll be looking at in this article are exclusively extracted from plants. Certain plants give better dyes that others, and – depending on the plant you’re working with – all parts of plants can be used, from roots to flowers and even stamens when it comes to saffron.

The time it takes to get the colors infused into the melted wax can also take quite a few hours – anything from 6 to 48 hours to get full saturation! More about this later in this article.

Which types of wax to use with natural dyes

When you’re using natural dyestuffs, you’ll need to use natural waxes – like soy wax, palm wax and beeswax – as well. These waxes are all differently suited to coloring, with soy wax being the most popular to color naturally.

Soy wax – made from soya beans – is perfect for container candles. As the wax is softer, it’s not suitable for pillar candles. Soy wax has a low melting point and great scent distribution, which is just what you want when working with scented candles.

Palm wax is made from palm oil and, unlike soy wax, is suited to making pillar candles as it is harder than soy wax.

Although beeswax is often made into rolled candles (with a natural heavenly scent) by using thin sheets of wax, it can also be used in containers to make container candles. Look out for pure, filtered beeswax.

Tip: Always make sure that the wax that you’re using – whether soy, palm, or beeswax – are harvested from sustainable sources, as in many cases areas of rainforest are destroyed to plant plantations in order to produce palm oil.

In this article we’ll refer to coloring soy wax throughout as it’s the most popular, but it works the same for all these waxes.

How to color the wax using plants 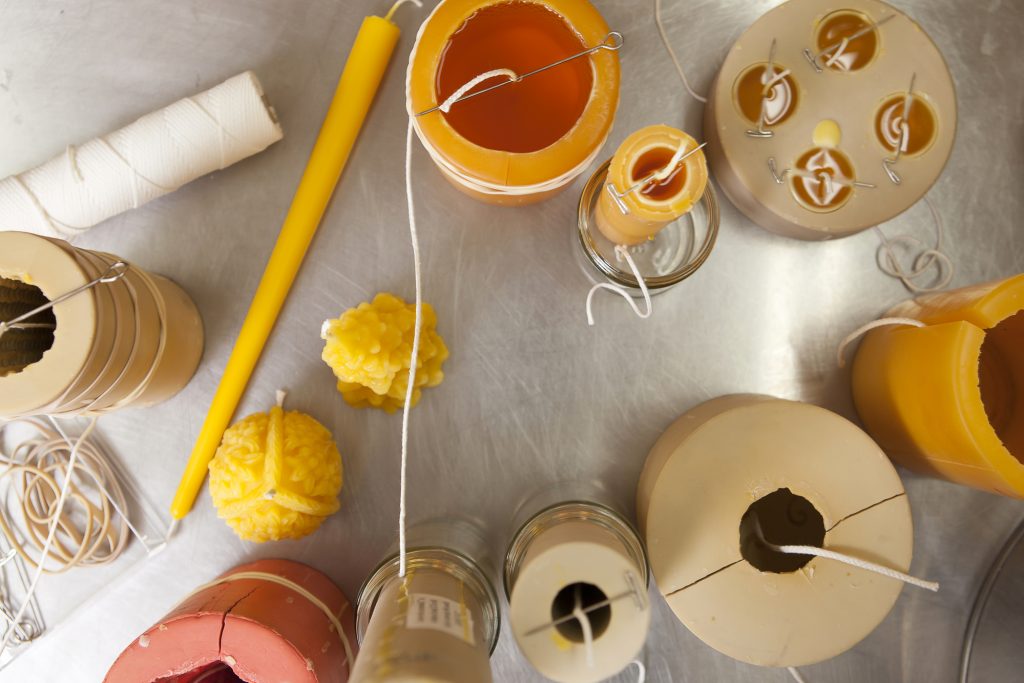 Although wax, when colored with synthetic dyes, is saturated with  color in minutes, using natural colors takes a long time because the fresh or powdered plant matter is used. The color, therefore, still needs to seep from the plants into the wax with the help of heat.

Preparing the plants for dyeing

To prepare the plants, make sure which part of the plant you’ll need to use – root, stems, leaves, flowers, stamens or a combination of these – and cut them into smaller pieces. This will make it a lot easier to get the color from the plant.  If you’re working with wheatgrass, you can even put it in a food processor for a second or two to cut it into tiny pieces (be careful not to juice it!).

Note: If you’re working with dried, powdered plants, like turmeric or spirulina, you can just put these as is into the coffee filter sachet. Don’t add water to the powder to turn it into a paste or liquid.

Bag it up and let it seep

Next, put the pieces of plant into a heat-resistant tea bag, a small muslin sachet, or a coffee filter. Use a twist tie or piece of wick to close the muslin sachet or coffee filter, turning the filter into a small sachet.

Slowly lower the sachet into the melted wax until the plants within are covered in wax, but the bag isn’t resting on the bottom of the pot of wax.

Now comes the magical part; you’ll see that the color of the dyestuff slowly seeps into the wax.

Preparing the wax for pouring

Once the wax is dyed the color that you want, remove the bag of plant matter, being careful not to burn yourself by touching the hot wax. If you find that some of the plant matter is in the wax itself, strain the leaves, etc. out before moving on to the next step.

Give the wax a final good stir to ensure the color is even, and then it’s ready to be poured into the containers you’ve already prepared by placing wicks inside.

Note: Make sure that you remove all the plant pieces from the wax before pouring the wax into its container, as leftover plant material could start to rot within the candle – not quite the smell you’re after!

Now we’ll look at which plants you can use to color wax with and the colors that they’ll deliver.

How to get warm colors when dyeing soy wax 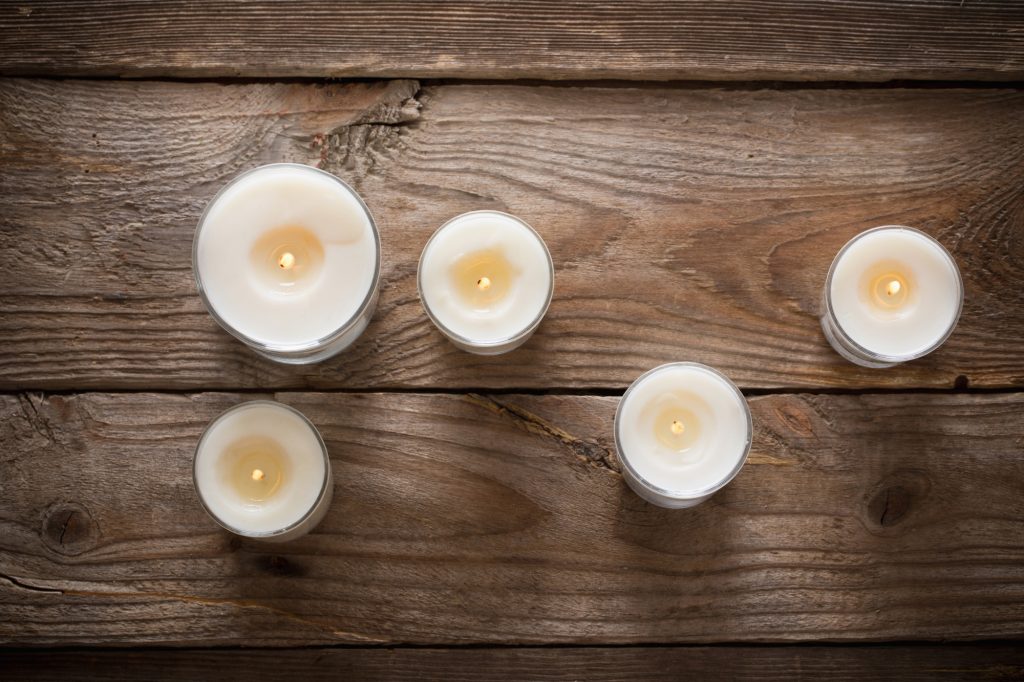 Tip: Whether you use it to crack open seeds or bruise leaves and roots, a pestle and mortar can be very helpful to get the most color out of the plants you’re using to dye the wax. Just make sure that you don’t use your kitchen one as not everything you use may be edible!

How to get cool colors when dyeing soy wax

Tip: Need a pastel blue candle? Then just seep the indigo for a shorter time in the wax or use less indigo per batch of melted wax.

Dyeing your candles naturally with plants are not only an eco-friendly way of coloring candles, but also a much more enjoyable and hands-on way of coloring wax. Many of the dyes you need may even be available in your own garden or on your spice rack!

Carin Marais is a fully bilingual language practitioner (English/Afrikaans) and a copy and content writer for a wide variety of digital and print channels. She has worked with both local and international companies on subjects as diverse as health and mindfulness, finance, beauty, décor, pets, food, and agricultural implements.