The Essentials of Ayurvedic Medicine 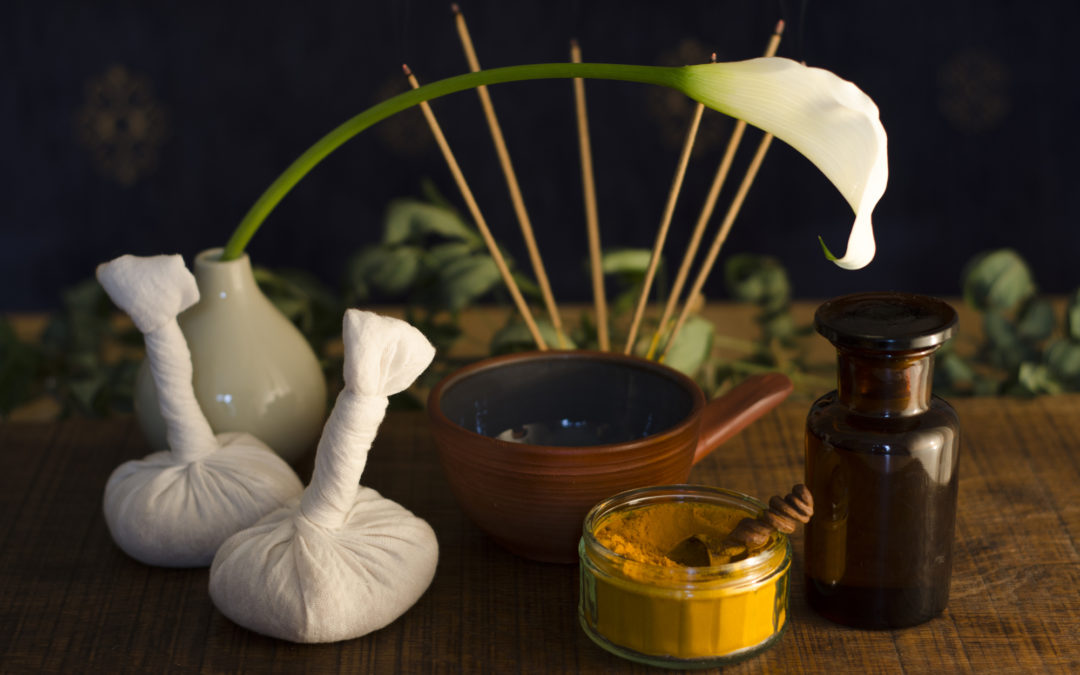 You’ve probably heard about Ayurveda or Ayurvedic medicine when looking for alternative therapies or even while reading up on relaxation and mindfulness.

In this article, we’ll look at what Ayurveda is, including its history, principles, and philosophy.

What is Ayurveda and when did it start?

Ayurveda (which in Sanskrit means “The Knowledge of Life”) is a healing science that is millennia old and some scholars believe it to be the oldest healing science as it originated in India more than 5,000 years ago. Some research points to Ayurveda beginning with the Indus Valley Civilisation (circa 3300-1300 BCE).

Those theoretical ideas which are central to Ayurveda, however, developed about 500 BCE.

The central Ayurvedic philosophical ideas have been shown to have parallels with Sānkhya, Vaiśesika, Buddhist, and Jainism philosophies.

It comes from the ancient Vedic culture and have been taught for thousands of years in oral tradition. Vasant Lad, in Ayurveda: A Brief Introduction and Guide, notes that the “principles of many of the natural healing systems now familiar in the West have their roots in Ayurveda, including Homeopathy and Polarity Therapy”.

What books or writings does Ayurveda have?

The Ayurvedic teachings are not only taught orally, but have also been written down (though not all of the writings are accessible). Classical Ayurveda texts “begin with accounts of the transmission of medical knowledge from the Gods to sages, and then to human physicians”.

According to the Sushruta Samhita, or Sushruta’s Compendium, the Hindu god of Ayurveda – Dhanvantari – incarnated himself as a king of Varanasi and taught medicine to a group of (human) physician. This group included Sushruta.
Along with the texts called the Charaka Samhita and the Ashtanga Sangraha and Ashtanga Hridayam, Sushruta Samhita forms the foundation of Ayurveda.

These main Ayurvedic texts are also available in English translations.

The eight components of Ayurvedic medicine

Ayurvedic medicine is divided into eight canonical components. The first time that these components are named, is circa 4th century BCE, in the Sanskrit epic, Mahābhārata.

These eight components are:

The main principles of Ayurveda

In Ayurveda, the maintenance and balance of your health is encouraged. This balance and health is achieved through “right thinking”, the correct diet and lifestyle, and the use of specific herbs. Vasant Lad notes that:

“Knowledge of the Ayurveda enables one to understand how to create this balance of body, mind and consciousness according to one’s own individual constitution and how to make lifestyle changes to bring about and maintain this balance”.

To have balance is the natural order, while imbalance is disorder. So, health is order while disease is disorder and it is this disorder that – when brought back into balance – brings back health.

The body has three principle energies which should be in balance as Lad states in the article “Ayurveda: A Brief Introduction”.:

“The cause of disease in Ayurveda is viewed as a lack of proper cellular function due to an excess or deficiency of vata, pitta or kapha”

However, every person has an individual energy pattern – their own combination of physical, mental and emotional characteristics. This is called your constitution and it is determined by these factors that remain the same throughout your life.

External forces can, however, also have an influence on your constitution, for example the weather or even the season, physical trauma, your work, and your relationships. It’s once these “factors are understood [that] one can take appropriate actions to nullify or minimize their effects or eliminate the causes of imbalance and re-establish one’s original constitution”.

The three doșhas or three energies of the body: vata, pitta, and kapha

The three principle energies of the body – called doșhas – is present in everyone and everything and is also related to the basic biology of the body: 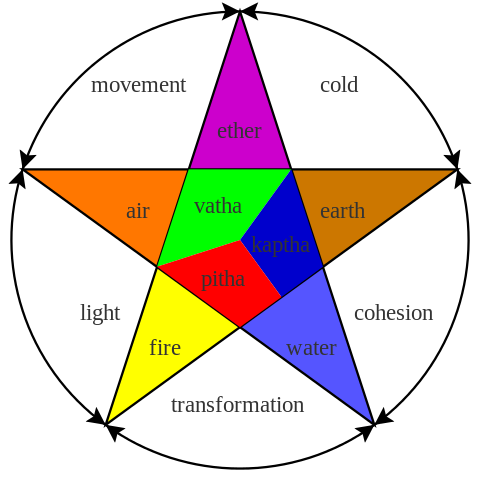 Vata – the energy of movement

An energy associated with movement, vata is composed of ether (also sometimes called “space”) and air. The attributes of vata are: dry, light, cold, rough, subtle, mobile and clear.
In balance, vata will promote creativity and flexibility, while fear and anxiety is caused when vata is out of balance.

Vata furthermore controls breathing, blinking, muscle and tissue movement, beating of the heart, and even the movements of cell membranes and the cytoplasm inside cells.

Lad notes that a daily oil massage before a bath or shower is recommended for vata types (people in which there is excessive vata). Steam baths, humidifiers and moisture in general may be helpful to vata types.

The general guidelines for keeping vata in balance, are to:

Pitta – the energy of digestion and metabolism

Consisting of fire and water, pitta is the energy that governs digestion, absorption, assimilation, nutrition, metabolism and also body temperature. The attributes of pitta are: oily, hot, light, mobile, dispersing, and liquid.
Lad writes that: “in balance, pitta promotes understanding and intelligence” while out of balance “pitta arouses anger, hatred and jealousy”.
The general guidelines for balancing pitta, are to:

Kapha – the energy of lubrication and structure

Kapha (formed from Earth and Water) can be described as the energy that holds our cells together and supplies the water for all our body parts and systems. This includes the lubrication of joints, moisturisation of our skin, and maintaining immunity.

In balance, kapha is expressed as love, calmness, and forgiveness while it is expressed as attachement, greed, and envy when it is out of balance. Kapha-types also have strength, endurance, and stamina while also being calm, tolerant, and forgiving. (“Ayurveda: A Brief Introduction”)

The general guidelines for balancing kapha is to:

Ayurveda further divides – as can be seen above – bodily substances (and indeed the entire cosmos) into five elements – or panchamahabhuta – and these are:

It is out of these five elements that the three doshas are created.

All matter are also believed to have twenty qualities – or gunas – which are found in pairs, namely:

Seven dhatu, which can also be called “tissues”, are found in the body. These dhatu, according to Ayurveda, are:

How illness (imbalance) is diagnosed with Ayurveda

“Ayurveda does not focus on disease. Rather, Ayurveda maintains that all life must be supported by energy in balance. When there is minimal stress and the flow of energy within a person is balanced, the body’s natural defense systems will be strong and can more easily defend against disease.”

Ayurveda can also be used in some ways along with Western/allopathic medicine in order to make a person stronger, less likely to be afflicted with disease, and help their bodies to rebuild after treatment with drugs or surgery.

The evaluation and treatment of imbalances in the body

Because Ayurveda addresses the patient holistically – that is to say, as mind, body, and spirit, an examination and evaluation of the patient and their symptoms must first be done.

The five senses are thus used to make a diagnosis.

During this evaluation, questioning, a physical exam, and inference will be used.

Part of the evaluation will include “taking the pulse, observing the tongue, eyes and physical form; and listening to the tone of the voice”. The patient’s suitability for certain treatments will also be considered during the evaluation.

When it comes to the treatment of the patient’s imbalance, palliative and cleansing measures may be used. Suggestions for managing the causes of the imbalance may also be given.

Lad notes that, in some cases, a cleansing programme (panchakarma) can be used to help the body rid itself of the accumulated toxins. This may lead to the patient gaining more benefit from the various suggested treatments. Recommendations may include lifestyle changes, for example dietary changes, and the use of specific herbs may also be recommended. An Ayurvedic practitioner may also use blood purification, massage, medical oils, enemas or laxativess.

However, you should always first speak to your health care professional before using any Ayurvedic compounds to ensure that any medication that you’re already taking won’t clash with the Ayurvedic treatments.

It is also very important to ensure that you get your Ayurvedic treatments from qualified and trusted practitioners as many of the Ayurvedic medicines have been shown to contain heavy metals that can cause life-threatening illness (Ratini, 2019).

If you would like to see how you can use Ayurvedic principles in your everyday life, be sure to check out this article.