Black Tea vs Green Tea (which is the right one for you?) 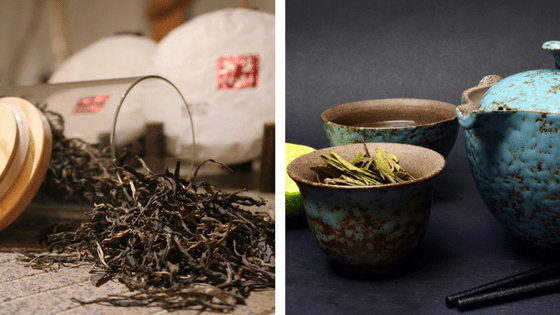 Black tea, something my dear mother and her generation from south-eastern Turkey (Kurdistan) drink quite a lot of!

And when I say a lot, I really mean a lot!

Its a tea I’ve grown up with and surrounded by as long as I can remember. It permeates the homes and it is an integral part of most middle-eastern cultures.

That being said, I myself never really fancied the taste of the tea, that is until these last years, where fittingly enough I’ve become somewhat of a regular tea sipper.

Even though I slightly favour green and red rooibos tea over black, that doesn’t mean I can’t enjoy and savor the mysteries that is inherent and present in black tea.

In this article I’ve made a compilation of some interesting details about black and green tea, in order to give you a better idea of what each tea is like, how their made, the benefits attributed to both and when it may be the best time to drink which.

Lets have a peek! Not all people who drink these teas are aware of the fact that both black and green tea are made from the same shrub, Camellia sinensis. The difference lies only in how they are processed and oxidated after they are picked.

To produce green tea the farmer first harvests the leaves, withers it under the sun (or in a cool breezy room) and then heats it through steaming or pan-firing, depending on where its made. This heating process stops the oxidation so the leaves retain their natural greenish colour and its distinct fresh flavour.

Black tea follows the same initial line of action, that is the leaves are harvested and withered, but then instead of heated, they are crushed and torn, curled or rolled and allowed to oxidize before being dried. The consequence of this prolonged oxidation, is that the leaves take on a darker colour and the tea takes on a stronger aroma and taste.

The benefits of black and green tea

It is worth to point out that most teas are filled with high amounts of anti-oxidants, as is the case with black and green tea alike. Often the benefits associated with one is found in the other, which isn’t shocking since they are indeed made from the same plant.

However since the method of processing and fermentation differs, there is no denying that the content of the teas also undergo a change. A change that may make one tea slightly more effective towards certain ailments and less so against others.

One study published in “The Journal of Nutrition” 2002 investigated and compared the anti-oxidant activity of both teas, what they found was that green tea generally has a “much higher” level of anti-oxidants per serving, which for all means and purposes is most likely a healthier thing! Continuing on the comparative thread of black vs green tea, an interesting example would be the difference when it comes to the amount of EGCG (epigallactocatechin gallate), a well-studied antioxidant that is known for its positive effects on cancer, cardiovascular conditions and for its capacity to stimulate autophagy, a physiological process that protects cells from the harmful effects of stress.

Green tea is filled to the brim with this “EGCG”, while black tea lacks these higher amounts.

Well because of the fermentation involved in making of the latter, in case that you forgot!

Moreover green tea has also been shown to be effective in controlling and maintaining a healthy balance between the good and bad levels of cholesterol in your blood.

While black tea as suspected has its own unique cardiovascular benefits, one of them being the optimal function of blood vessels as in the case of a coronary artery disease. It is most likely that the flavonoids and minerals like manganese are partly responsible for this benefit.

According to a 2004 study made at the University of Newcastle, Australia, both black and green tea could potentially help against different memory related brain diseases, the most notable one being Alzheimers.

Interesting fact: Coffee was also included in this study but to no avail as no significant effects were observed.

Another concrete example would be the amount of fluoride, a substance that is often proposed to be beneficial for teeth and bones, found in each teas though generally slightly more in black tea.

What does this mean?

Well it could mean either/or, that is if higher fluoride levels indeed are good for your teeth, then maybe black tea is more beneficial against cavities and other dental nusicances.

However if higher fluoride levels are more toxic than medicinal, then maybe it ain’t so good after all!

Its worth to mention that aside from the fluoride, other chemicals like polyphenols, phytochemicals and tannins present in black tea can also be quite beneficial for teeth and bones!

Both green and black tea have caffeine in them, which as you most likely know, can help boost mental alertness and perceptivity.

Lets talk more about caffeine and how to handle this blessing that sometimes can also be such a curse!

Caffeine levels and when to drink which?

Since black tea generally has more caffeine than green, though not always, black tea fits in perfect during the morning and early midday. I mean who can argue against sipping on black tea while having a hearty breakfast.

Green tea on the other hand I’ve found to synchronize rather smoothly with a mindful moment during the evening. Depending on what time you lay your head on your pillow at night, it is up to you to decide if the caffeine levels in both these teas are enough to keep you awake.

Generally it is best to avoid drinking black tea right before bed, and if you were to drink some tea before sleeping green tea would obviously be the right option of the two.

Having said that, my own personal recommendation for tea before bed would be the South-African red rooibos tea, as it is naturally devoid of caffeine which makes it a rather great option for avid tea lovers to continue their tealicious “addiction”.