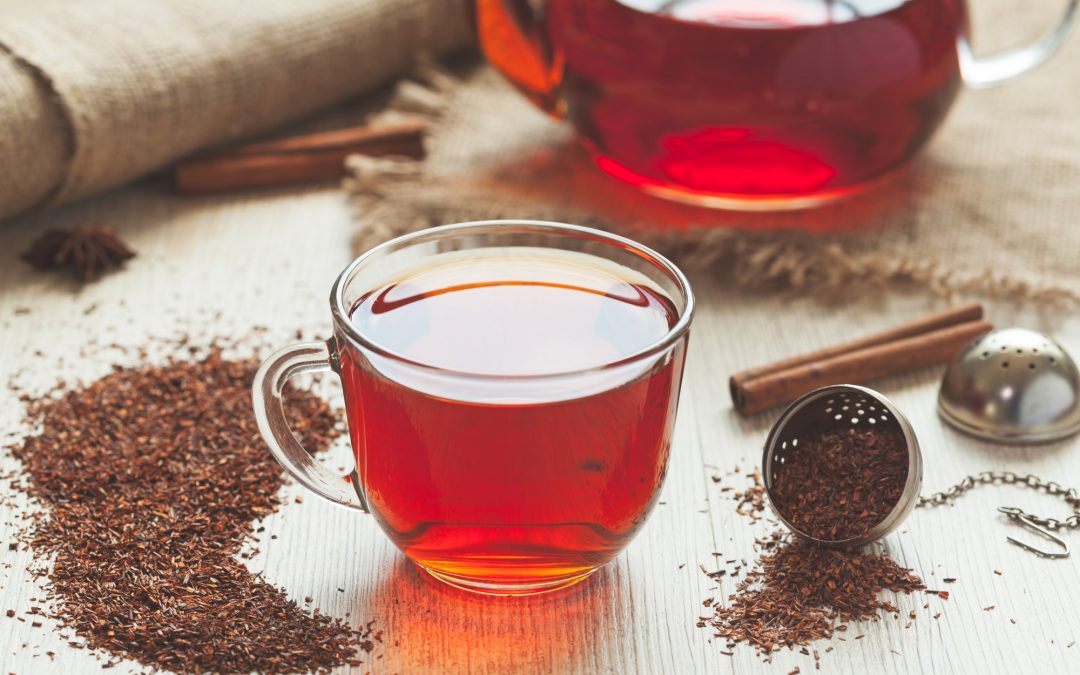 Rooibos, also commonly referred to as red tea, not only tastes lovely but can also have a variety of beneficial effects on your health and overall wellbeing. These benefits range from improved digestion and blood circulation to better skin and stronger hair, teeth and nails.

Most of these benefits stem from the teas richness, or better put, goldmine of anti-oxidants.

So if that doesn’t grab your attention, maybe these following reasons will!

With no further a due, here are a handful of reasons on why you should consider drinking rooibos red tea more frequently!

Rooibos tea is naturally free from caffeine as it is made out of a completely different plant/bush, the Aspalathus linearis bush plant found in South Africa, than the Camellia sinensis, which happens to be the Asian bush plant than is responsible for almost if not all of the other teas produced the world.

Now rooibos tea being caffeine free can have multiple implications for you who’s an avid tea drinker and lover.

The first implication is that you can drink more amounts of it without being concerned about the negative side-effects of too much caffeine consumption.

Another implication is that you could drink Rooibos late at night, before bed if you will, without having to worry about the caffeine potentially messing up your sleep.

The third and final implication for us to mention is that rooibos becomes viable for pregnant women, because the caffeine in coffee and other traditional teas has shown to be harmful towards the placenta, i.e.the part that carries the oxygen and nutrients to the baby.

That being said, rooibos can be a life-saver (literally) if you feel that you need a break from caffeine-based beverages, especially if your catching yourself drinking too much coffee and other “actual” teas, green, black, white tea etc, that actually do contain considerable amounts of caffeine.

Rooibos are filled with antioxidants, we get that.

Its a word that gets thrown around a lot, but what does it really mean?

Now if you aren’t too familiar with biological and/or nutritional concepts, antioxidants are molecules that slow or stop the oxidation of other molecules.

Without going into the nitty gritty scientific details of what this means, antioxidants, aspalathin (completely unique to rooibos) and quercetin to mention a couple ones in the case of Rooibos have shown to have multiple health benefits.

The health benefits of these anti-oxidants are many, some of which will be covered below, and most of these benefits are mainly derived out of the process oxidative stress reduction, which simply enables ones body to function healthily.

If you are curious to exactly what these anti-oxidants can help against, follow me and lets see them in action below: The richness in anti-oxidants and the rare nutrients found in Rooibos can among many things improve your skin and help stimulate hair and nail growth.

The high levels of flavonoids in rooibos open up for the possibility of treating and preventing certain skin conditions like eczema and acne.

You can choose to either drink it or apply the tea topically on top of the irritated skin for relief.

Or simply do both!

Rooibos for hair and nails

Rooibos contains the rare acid alpha hydroxy acid and considerable amounts of minerals such as zinc, calcium, copper and potassium, both of which can do good for your quest towards optimal hair and nail health.

By increasing the mineral content of your bones, especially calcium, manganese, zinc and fluoride, rooibos could potentially make your bones stronger and more robust.

Iron is also important for bone health, which rooibos happens to contain as well. In addition rooibos contains lower amounts of tannin, compared to other teas, and this lower amount of tannin makes it possible for your body to more effectively absorb iron when you’re eating food.

Last but not least, the notable and already mentioned flavonoid and anti-oxidant quercetin could potentially reduce the cortisol levels in your body, and thus indirectly, protect your bones from the possible damaging effects of chronic stress. Drink a cup if you already haven’t!

Your heart will thank you for it, trust me.

One of the many flavonoids present in Rooibos is chrysoeriol, which is especially good for improved blood circulation and the lowering of blood pressure.

Rooibos is also known as bronchodilator, as it helps the blood vessels to relax and widen, making it easier for blood to flow through.

A study done in Sweden found that about 30 to 60 minutes after drinking 1-2 cups of Rooibos, the activity of a certain enzyme called angiotensin-converting enzyme or ACE was significantly suppressed.1 The enzyme is believed to be related to the development of heart disease and is also a reason why ACE inhibitors often are prescribed to treat hypertension and heart disease.

Rooibos has the potential to ward off obesity, which some if not most of us know that the risk for getting type 2 diabetes increases significantly when one is overweight. By removing that “obese” factor, that is one legitimate way in which rooibos can counter-act the development of diabetes.

Another way is through our good ol friends, the anti-oxidants.

According to some studies, the anti-oxidants found in rooibos can significantly reduce risk for type 2 diabetes. The properties of the tea, especially the unique aspalathin found in Rooibos, can help regulate and lower the glucose levels in your blood.

This was confirmed in a study made on diabetic rats conducted by the SA Medical Research Council (SAMRC).2

Interestingly enough, according to the article, a human trial to test the effectiveness of rooibos on diabetics has been planned for now in 2018. Exciting! 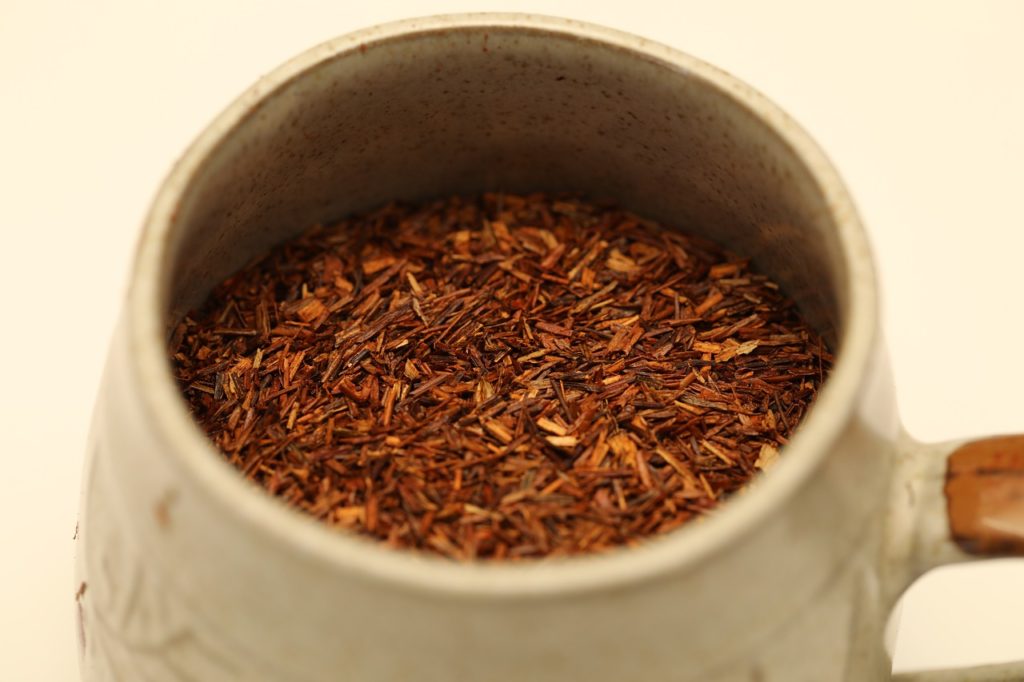 Compared with other organs, the brain is especially susceptible to excessive oxidative stress due to its constant high demand for oxygen.

And what did we learn about the rooibos tea?

Its a gold-mine for a variety of anti-oxidants! Which are responsible for combatting exactly this process of oxidative stress.

But what does this mean concretely?

It could very well mean that the age-related diseases of the brain, like alzheimers and parkinsons, could potentially be warded off and/or delayed.

It could also mean that your brain functions, such as memory could function more effectively.

But it certainly doesn’t mean that if you drink enough rooibos your head will grow big as the head of a super-intelligent martian!

The plant polythenol (flavonoid) quercetin present in rooibos, has been shown to be effective in treating a variety of diseases and not surprisingly has also reportedly been used by doctors and patients alike to treat different forms of cancers.

Quercetin appears to be beneficial when it comes to suppressing malignant tumours3 from growing further, it does this by disturbing the processes behind cell mutation.

Moreover another reason why Rooibos can be a complementary natural way of treating cancer is because the way the immune system is benefited from the antibodies which are produced4 when the flavonoids and anti-oxidants in rooibos are consumed.

Rooibos can be a great choice for those who are trying to lose some fat and achieve a healthier lifestyle.

The mild and sweet taste inherent in rooibos accompanied with the production of the satiety hormone called leptin, can prove to be effective factors in suppressing that nasty appetite of yours and in doing so giving your body a chance to find its way back to its optimal weight. 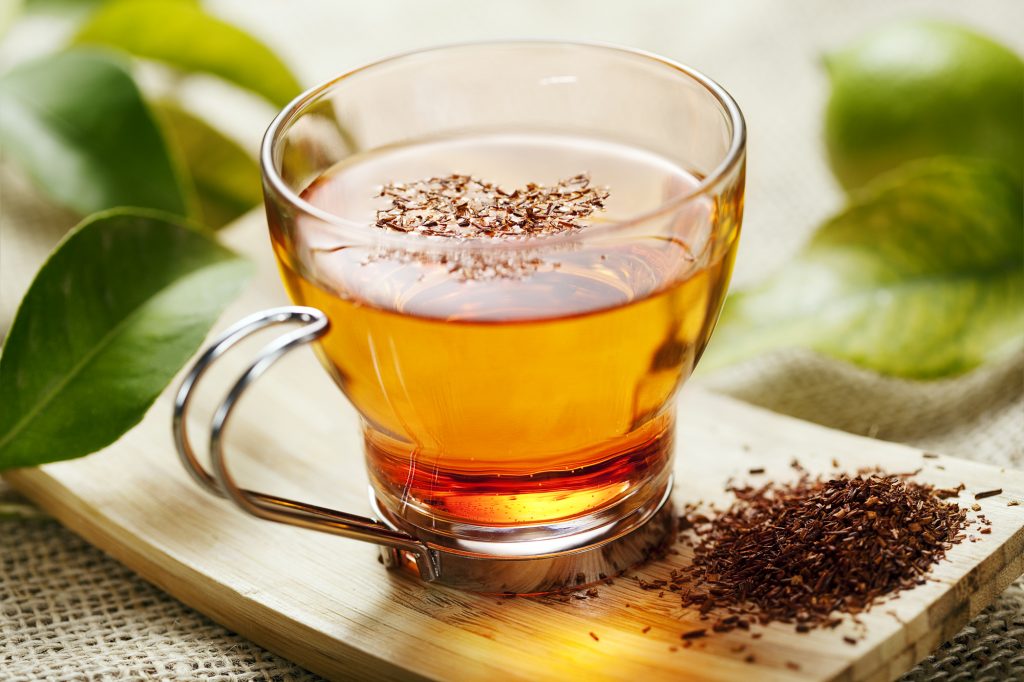 Relaxation, we arrived to that final place!

After all, the theme of True Relaxations is relaxation. Rooibos tea is featured on this site because it is a great way to relax, especially if you aren’t in the mood for the jolting effects of caffeine, rooibos instantly becomes the number one go-to choice.

So before bedtime take a cup of this crimson tea and allow yourself to be primed for a potential night of perfect sleep.

Rooibos is truly a unique tea, it has many health benefits associated with most other teas, while at the same time being quite different in many regards.

The caffeine free, sweet and aromatic flavor of rooibos makes it one of my favorite teas to drink. Have a cup!

Our bodies are all unique, and copious amount of anything tend to be counter-productive and even harmful.

Even though there are a number of studies that suggest benefits associated with rooibos tea and that for most people it probably is a healthy beverage to consume, however it may not be the case for everyone.